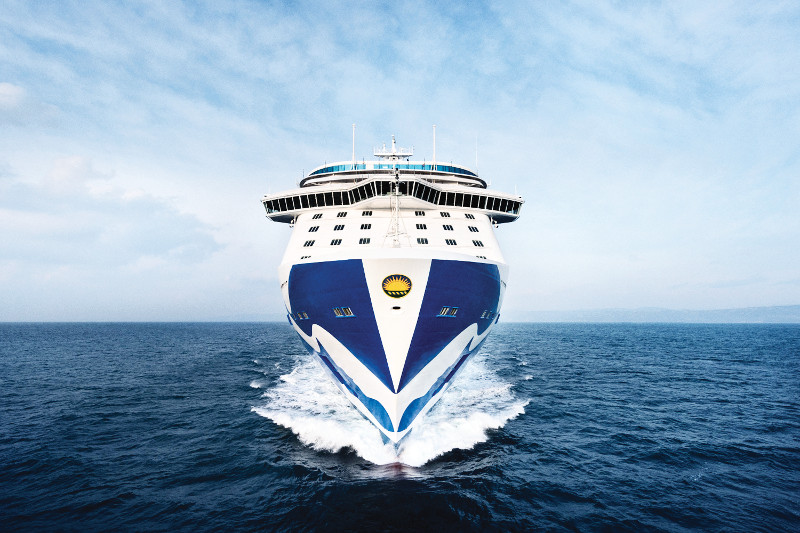 Coral Princess,®with more than 700 balcony staterooms, was custom built to navigate the historic Panama Canal. Be sure to try the Bayou Cafe & Steakhouse,SM which features New Orleans-inspired Cajun and Creole cuisine, join friends for cocktails and Movies Under the Stars® by the pool or try some decadent treats at the International Cafe.

When the early colonists began building Adelaide they built with stone, constructing a solid, dignified city that is civilised and calm in a way that no other Australian state capital can match. The solidity goes further than architecture, for Adelaide was once regarded as a city of wowsers and was renowned chiefly for its disproportionately large number
of churches. But there is no denying that the city has a superb setting-the centre is surrounded by green parkland, and the metropolitan area is bound by the hills of the Mt Lofty Ranges and the waters of Gulf St Vincent.

Accommodations
Ranging from camping grounds to up-market hotels but whatever your budget make sure you book well ahead if you intend to be in town during the Adelaide Arts Festival. Most hostels are in the south-eastern corner of the city centre; Hindley St in the city has mid-range options, North Terrace has the top-end hotels. Adelaide is famous for its focus on food and wine and has more restaurants per head of population than any other city in Australia. Its huge variety of cuisines and wide range of local wines make dining a culinary adventure. Rundle St, Hindley St and North Terrace are the main food centres.

Environment
The streets of Adelaide’s central business district follow a grid pattern which makes it very easy for visitors to find their way around. Victoria Square sits in the centre of the grid. The River Torrens separates the city centre from North Adelaide, and a green belt of parkland surrounds both areas. Adelaide has a Mediterranean climate with maximum temperatures averaging 28 degrees centigrade between November and March. In winter, temperatures can fall below 10 degrees.

Attractions
The South Australian Museum, which has a huge whale skeleton in the front window, is one of Adelaide’s landmarks. The museum has a good collection of Aboriginal artifacts, including an Aboriginal Dreamtime exhibition. Looking uncannily like a squared-off version of the Sydney Opera House, the Festival Centre is the home of the Adelaide Festival. Inside, there is a variety of performance spaces and galleries, and there are free rock concerts in the outside amphitheatre on Sundays
during summer. One of the most pleasant aspects of the Festival Centre is its riverside setting; people picnic on the grass out the front and paddleboats can be hired nearby. Tandanya is an Aboriginal cultural institute containing galleries, arts and crafts workshops, performance spaces, a cafe and a gift shop. On Friday nights there are performances of plays and traditional music in the cafe. The East End Market is the place to head for alternative clothes and jewelry. The Orange Lane Market is Adelaide’s answer to Petticoat Lane, with Indian fabrics, second-hand clothes, tarot readings, antiques and even massages on offer. Glenelg is one of the most popular of the beaches which stretch in a long chain south of Adelaide. It is also one of the oldest parts of Adelaide, so there are a number of places of historic interest. A vintage tram runs from Victoria Square in the city centre to Glenelg Beach, taking about 30 minutes.

Welcome to Brisbane, the capital of the Sunshine State and Australia’s third largest city. Brisbane is a booming city with over one million people and is the major international gateway to South East Queensland. Brisbane also provides access to the holiday destinations of the Gold Coast to the South and the Sunshine Coast to the North. Brisbane is Australia’s third largest city and the state capital of Queensland. Not so long ago, the rest of Australia considered it little more than an
overgrown country town, but it has shirked off this unwelcome reputation to become one of the country’s most progressive centres.

Explore Brisbane
Brisbane offers a whole range of activities for the visitor. The South Bank Parklands has 16 hectares of fun and excitement: Tropical rainforests, beaches, wildlife habitats, restaurants, specialty shops , shows and even an English style pub. The Queensland Art Gallery, the Queensland Museum and the Maritime Museum are justifiably famous. Customs House provides a look back in Queensland’s history, as does Newstead House complete with period furnishings.
With its Sub-tropical ambience, Brisbane has many gardens and parks. See the Koalas at the Alma Park Zoo, the Australian Woolshed also has sheep shearing demonstrations and don’t miss the Lone Pine sanctuary, the famous City Gardens and Mt Coot-tha Gardens.

In Northwest Australia on the Indian Ocean, where the desert meets the sea.

The Great Barrier Reef curves close to the coast and meets the rain forest at Cairns, the gateway to Australia’s “Deep North.” Explore the reef up close via catamaran, or choose from a host of excursions the lush tropical forests, picturesque towns and homesteads that surround the city. The nearby town of Kuranda has a butterfly farm and a great street market on Sundays and Wednesdays.

Darwin, capital of the Northern Territory, N Australia, on an inlet of the Timor Sea. It is the chief port and administrative center for the sparsely settled tropical north coast. Called Palmerston until 1911, it was renamed for Charles Darwin, who discovered its site in 1839. It has been largely rebuilt since a devastating typhoon in 1974. Kakadu National Park is nearby.

Click on the buttons below to request a quote on this deal or contact us directly with further questions or comments.

Request A Quote Send To A Friend Have A Question? Contact Us

Send To A Friend